Malaysia‘s Prime Minister Muhyiddin Yassin narrowly cleared a major political test on Monday, as his coalition won just enough votes to remove the lower house speaker in a vote seen as an important barometer of his government’s support.

The vote was the first real measure of Muhyiddin’s backing since his coalition took over the government in March after a power grab within the then ruling coalition led to the resignation of predecessor Mahathir Mohamad.

A total of 111 lawmakers supported Muhyiddin’s bid to remove Mohamad Ariff Md Yusof, a widely-respected former Federal Court judge, who became speaker after the last election in May 2018. Some 109 voted against the move. One government member was absent for medical reasons.

Nga Kor Min, one of two deputy speakers and a member of the opposition Democratic Action Party, announced his resignation before the motion to remove him from his position was tabled.

Malaysia has been grappling with political and policy uncertainty since Muhyiddin, who was part of Mahathir’s administration, unexpectedly became prime minister after forging an alliance with the corruption-tainted United Malays National Organisation (UMNO), which was removed from power in the 2018 election. 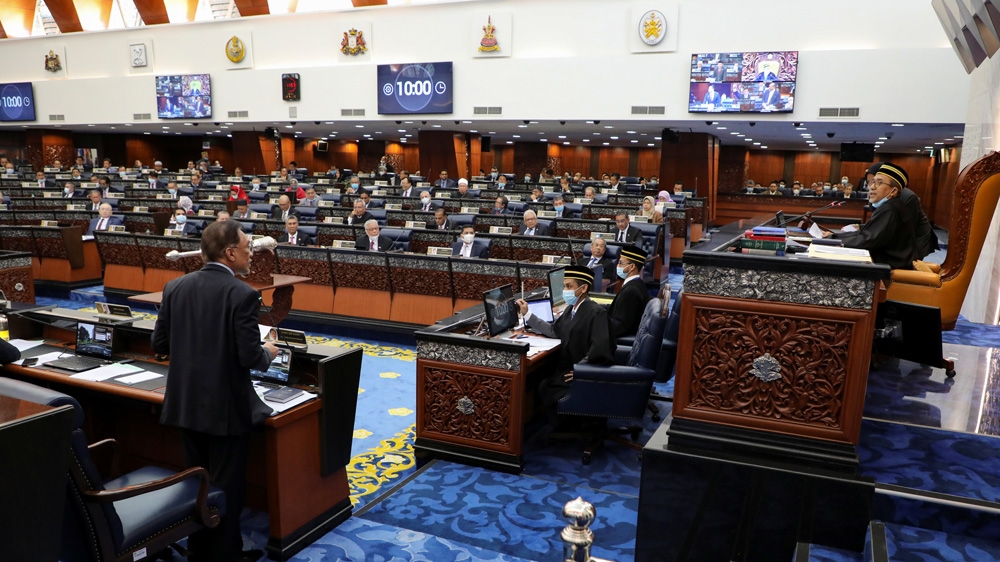 After the session resumed after the lunch break, the new speaker was installed without a vote.

Opposition members jeered as Azhar Azizan Harun, popularly known as Art Harun, took his oath of office. He had been appointed to lead the Elections Commission when Mahathir was prime minister.

Amid the uproar Azhar suspended the sitting and said parliament would reconvene at 10am (02:00 GMT) on Tuesday.

This week marks the first full sitting of Malaysia’s parliament since the sudden change in government, and the coronavirus pandemic, which led to a nationwide lockdown, or movement control order, on March 18.

Parliament previously sat on May 18 but the government limited the session to the ceremonial opening and the king’s address because of the coronavirus. No online sittings were held.

How can Art Harun be Dewan Rakyat Speaker without a vote? It’s an elected job, not an appointment from the Executive. Parliament must be independent of the Executive. The Speaker must be voted in by MPs, representatives of the people, not appointed by the PM.

Mahathir and others in the opposition have been pushing for a confidence vote since March, but the motions are unlikely to be discussed because government business is always given priority.